Jim is the founder and president of Sports Journeys International L.L.C. (SJI). Jim was a head men’s basketball coach at the collegiate level for 37 years and planned, as well as acted as tour manager for, 10 overseas tours for his team over those years. 3 of those tours were to Ireland, where he developed a passion for touring the Emerald Island. Jim has also helped several other coaches plan their tours to Ireland and throughout Europe. He has personally toured every country in western Europe and most of those in eastern Europe. Jim was a history teacher and assistant principal (M.A.Ed) for 13 years and was a tour manager for high school students during those years. He was also a high school soccer coach for 9 years and a collegiate tennis head coach for 30 years. During his time as a collegiate tennis coach he took his teams on 15 spring break tennis tours to Florida. During his younger years he traveled throughout Europe as a professional tennis player and has been a teaching professional and active member of the Professional Tennis Registry. Jim was also the director of the Greyhound Basketball and Tennis camps for 35 years which enrolled more than 10,000 campers during those years. Additionally, he served 3 years as a collegiate director of athletics. Combining his coaching experience, extensive travel experience, and administrative experience has provided him with the expertise and the pathway into the sports team travel business. 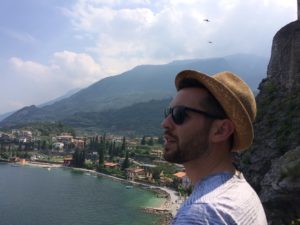 Jeremy is the Managing Director of Sports Journeys International. He is focused on Team Tour Management and is the Director of Finance. Jeremy spent 8 years as an assistant coach at the collegiate level. While coaching, Jeremy received his MBA in 2012 and worked in the Healthcare Finance industry holding the position of Controller of a mid-level Healthcare Services company before moving to France in 2016. He has been part of 8 international team tours in his lifetime including 1 as a player and 2 as an assistant coach. 2 of the international tours that Jeremy was a part of led him to Ireland. Jeremy also spent 15 years as a camp coach and assistant to the director of Greyhound Basketball and Tennis camps. Since moving to Paris in early 2016 he has continued his expansive European, Asian and African travel experience both with groups and individually which has helped lead him to Sports Journeys International. He has also continued his love for service by teaching English to both students and adults a few times a week.